Mordheim "The Caravan" scenario playtest (The Enemy Within)

And a new post! Getting more into a regular schedule now.
Time to delve into the crazy world of the rules for wagons!

This scenario was originally released in Town Cryer 11, before the full rules for wagons were released. I have updated it to be in line with current rules, and added a few rules clarifications. 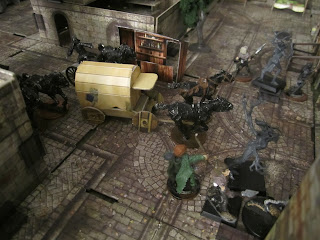 This is an iconic scenario for a wilderness campaign, where one warband is escorting a traveling caravan and has to protect it from a raiding warband lying in wait.
The attackers start the game hidden, which allows warbands that have invested in stealth to shine at ambushing. 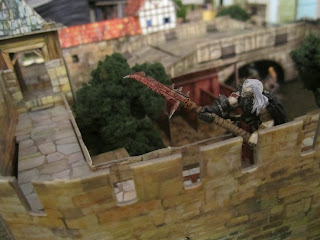 The battle can take place either in a town or in a village setting: the crucial part is that buildings can be used for cover and better positioning. Also, there are several roads along the length of the table, which cross each other and turn at given points. These are meant to restrict the wagons' movement somewhat. Why? Well... Wagons move very fast! Especially in a straight line (10+d6" if you Apply the Lash!). Even when models are standing in front of them. 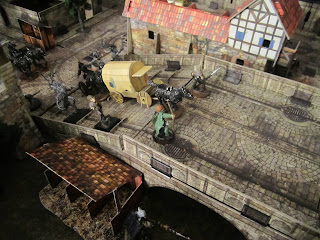 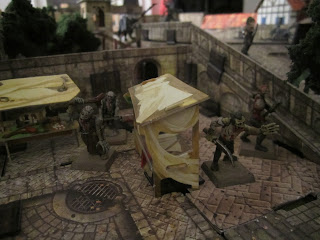 This scenario is a great introduction to the wagon rules for warbands who may be considering getting one, but feel daunted by the rules. The three "wagons" in the caravan are Carts (or Treasure Carts), smaller 3-person wagons, each pulled by 2 draft animals. 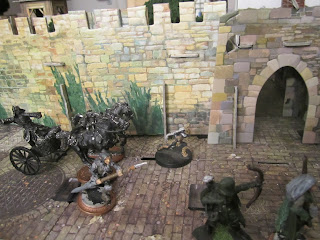 Stopping the wagons from moving isn't as easy as it may look, as they can plow through a blockade. The easiest way is to go for the draft animals. Even if you don't wound, hitting them is enough to spook the beasts and potentially send the wagon Out of Control.
Wagons have a 1 in 6 chance of going Out of Control whenever they collide with something, when the draft animals are pushed too hard by the driver or it's wheels are hit hard enough. Additionally, if draft animals are hit, it automatically goes Out of Control!
A wagon Out of Control cannot control its direction or speed, and may veer dangerously to the sides. This becomes dangerous when it collides with walls or other obstacles, suffering a S5 hit and possibly prompting further Out of Control tests.
Now, not all results on the Out of Control are a death sentence. Especially after adding the Driver skill to the NPC caravan drivers, which allows a re roll on the table. 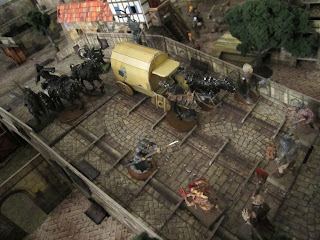 
Hope this gets you curious to use wagons more in your games! They introduce a lot of fun chases in games, and are very cinematic.
Next, I'll playtest The Stagecoach scenario!