The Narrator has moved to Boston!!

I have left the 'Auld Reeky' city of Edinburgh, and carried all my crap across the atlantic to Boston, US.

I wish to give my heartfelt thanks to the folks over at 6s2Hit wargaming shop & cafe, who so graciously hosted all our Mordheim events and campaigning in Edinburgh, and provided all the tabletop scenery support one could hope for.

Congratulations to Kenny for putting together such a fine business, and together with Wayne and Tyler for making it so approachable and easygoing place to game, eat and just hang out.

I will soon attack the local places, to gather around other Warhammer Fantasy gamers and raise an all-new Mordheim Campaign group from scratch.
Watch out, Compleat Strategist, Pandemonium Games and Hobby Bunker, I'm coming for you!

Mordheim Campaign: a playtest to "The Enemy Within"

Today I will show you a few snapshots and experiences from our Mordheim campaign, which has been running for the past year, in the hope to pass on some useful advice. 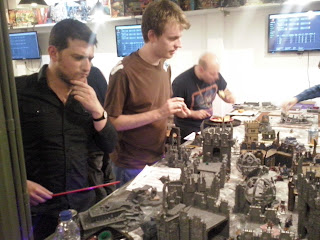 Roughly a year ago, I managed to spark interest among some Warhammer Fantasy gamers here in Edinburgh to start a Mordheim campaign. Throughout that period, a group of 5 swelled to 10, with a few others more interested, such that we didn't have any more space to cater. Even now, every two months or so another person manifests interest. The low barrier to entry (15-20 models required) and the flexibility of the system added to its allure, and our constant presence at the local venue and the amazing terrain at the table also drew a lot of attention. 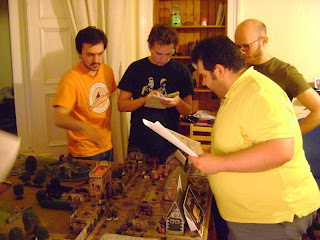 To get this thing going properly, I decided to use the 'Empire in Flames' setting as the place for our campaign (with the fields and villages of the Empire as our stomping grounds). But I wanted the campaign to provide the players with a good dose of story for their warbands, so I introduced the innovations from"Border Town Burning" and "Mutiny in Marienburg".
So I cooked up a mashup of Empire in Flames together with Border Town Burning as a campaign framework, and injected loads of great Town Cryer scenarios that really bring life to the game. Thus, we started our fledgling campaign, Empire Burning: The End Times. (yes, it is a ridiculous title).

We are based at 6's2Hit, the local wargaming shop & venue, also now a cafe, which has become one of the best places to play wargames here in Edinburgh. Above you can see some of the tables we set up, thanks to their great and generous terrain collection, with also good use of my Terraclips modular dungeon scenery. 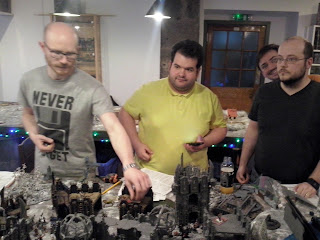 We had a wealth of warbands, and we explored also all of the different Objectives introduced in Border Town Burning and some from Mutiny in Marienburg. 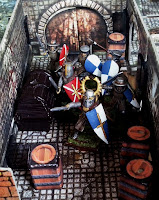 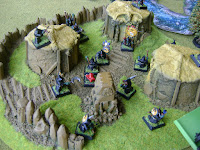 Throughout this period, we substantially tweaked some fine points in the Mordheim rules, to address many of the imbalances people have cried out about over the years. We wanted everyone to have a good experience, and tidied several rules that the designers could themselves certainly have addressed. The fruits of our labour have been uploaded here: Mordheim Compendium - The Edinburgh Revision.

Thanks to these changes, people are now equipping their warriors with armor, no longer always giving two weapons to them, experienced warriors can parry better, and many other little things. Overall everyone has welcomed the changes, as they make the game flow smoother and fall less into powergaming builds.
I should note that our changes always try to be as little intrusive and complex as possible: we don't want to reinvent a game, we want to patch it up on the few holes it has, to the benefit of everyone. Nobody wins if the game ends up becoming unrecognizable to veteran players. 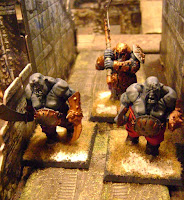 An interesting thing that happens in Narrative Mordheim campaigns is how the Objectives interact with the Scenario rewards, Exploration results and the special abilities of some warbands. Sometimes with very unpredictable and dire consequences, so be on the lookout.
One of these was the combination of the Ogre Maneaters warband and "The Body Trade" Objective (from MiM). To cater to the Body Trade objective in this campaign, we introduced a few scenarios where the winning warband could acquire captives. The Ogre player snatched a few stragglers through exploration and through scenarios, gobbled them up (thus raising the Ogres' Experience), and soon he had a veritable fighting force to contend against, and their Objective now granted them the ability to capture enemy warriors during combat. This caused a very quick increase in their Campaign Points (CPs) and more victims to increase their Experience, much to our worry!
Perhaps it was just a fluke in our campaign, but eventually we did have to carefully tweak the wording of the "Slaver" ability in the "Body Traders" Objective, to ensure that the player could not just simply capture enemies non-stop with his one all-powerful leader, and continually rack up CPs. 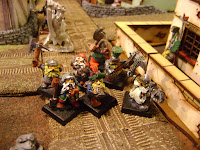 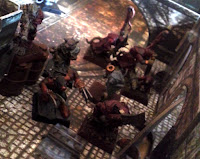 Narrative campaigns also provide great backdrop for alliances and backstabbings, which happened every now and again. Former enemies were forced to ally because they were faced against too powerful of an opposition (although still nurturing thoughts of betrayal). And certain individuals become infamous among the players, such as the Pestilence caster Marauder Seer (who would poison a quarter of a warband each
time his spell was unleashed) or the magic-carpet riding Dwarf Noble with his missile weapons. 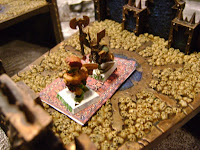 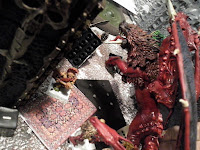 However, it's good to be on the lookout for multiplayer scenarios which allow allied players to share the reward: in some scenarios warbands can themselves ally against an NPC monster, and then share its hoard (and thus there are no warbands competing on the table at the end). Such scenarios must ensure that at least 3 players are present at the beginning, otherwise there is no way to prevent both players from taking advantage of the rules (as they are no longer competing with each other, only against "the rules of the scenario").
Another important point about Scenarios is "winner-takes-all" types of scenario, especially multiplayer ones. Sometimes only one winner is intended and the reward is meant to be large (these scenarios should be used more seldomly, more relegated to Special scenarios). Other times, multiplayer scenarios where 3 or more warbands should  have secured objective items around the table end with many of these items still unclaimed (and thus the winner takes them all): these scenarios seem harmless at first but many force the losing warbands to drop every objective item they are carrying, while the winner gets to earn all other unclaimed items. This can lead to large imbalances, so either make sure losers still get to carry something home (if they are not within charge distance of an enemy when they Rout) and don't put down too many of these objectives per scenario. 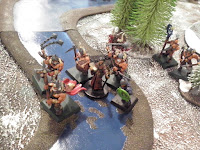 We also optimized a way to generate matches and determine scenarios, so that it could accommodate several players meeting for games separately instead of having to meet all together in one day to decide opponents.
We are still tweaking it as we go: for a long time the system favoured the underdog, which was not a problem, until it became clear that the warbands further ahead in CPs simply could not choose beneficial scenarios for them because they never go to pick one.
Now there is a chance that the challenged warband gets to instead pick the scenario.
The balance to strike is between fairness on a game-by-game basis, overall game balance and just players having fun each round.

But perhaps the most important thing we found about Mordheim Narrative Campaigns is: how long should they be?
Our own was running at the speed of a game turn every two weeks (give or take a few holiday periods), and we got 20 turns done so far. We are all either professionals or graduate students, so our schedules are pretty full to arrange a game every week.
Certain scenarios granted CPs bonuses to certain Objectives if the warband wins it, so there was an extra boost that sped up the campaign, depending if the right warbands won the right scenarios: I added this in specifically, which would mean our campaign would progress more quickly. Because of the Border Town Burning specific objectives,the campaign revolved much around the four Chaos Artifacts. These were damn hard to find, so until they were there was a long, long crawl in terms of Campaign Points for several Objectives, while others surged ahead at high speed (those which DIDN'T need Chaos Artifacts to gain their CPs). This is something to bear in mind when playing Border Town Burning as well. 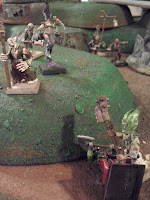 The thing to be careful of is how long people are willing to invest. Wargamers generally are interested in shorter, few-months long campaigns, while they paint up their warband and any other accessories they might acquire, before joining a different campaign (of the same game or another). Roleplayers might be interested in campaigns lasting a year or two, where there are more stories unfolding with each game. Of course most people fall somewhere between these two extremes, and the frequency of game turns will also make a lot of difference.
It is possible that a bit of liberal and careful boosts to everyone's CPs now and again, or throwing in campaign Items (like Chaos artefacts) at a set turn number, may help propel things forward.


Finally, after stress-testing and optimizing so many scenarios and Objectives this past year, I will pull all of this together to craft a proper, final version of the Empire in Flames campaign, "The Enemy Within". It will focus on village-raiding and hostage-taking (of imperial nobility), with the possibility of manipulating imperial politics so that warbands are thrown into opposition. All the while leaving the way open to invaders and conquerors.

Hope we have helped, and possibly inspired someone else to organize their own campaign, or just pick up Border Town Burning and run it from there. 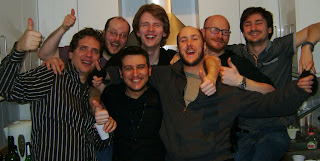